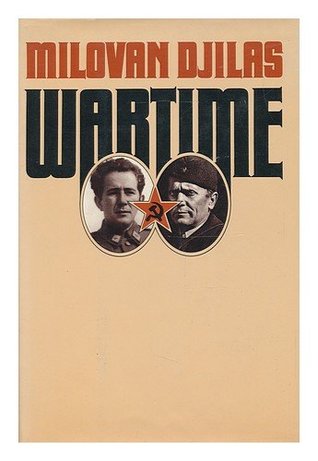 A war memoir of Milovan Đilas, Wartime for me personally did not add many “new” historical or factual details, but being written decades after the war by a key participant with turbulent postwar political career, it did provide a valuable insight in the atmosphere and the mentality of the antifascist uprising and the fight for liberation.

For better understanding and appreciation, perhaps it is useful to know a little bit of Đilas’ background. Born and raised in poor and rural Montenegro as a son of an officer of Montenegrin army, he had been given a high school education and he enrolled in Belgrade University, studying law and philosophy. Soon after arriving to Belgrade in 1932, Đilas (21 at the time) became politically active with the League of Communist Youth of Yugoslavia, and in 1933 due to his successfull activities he became a member of Communist party of Yugoslavia (CPY). Soon after he got arrested and he served a two and a half year prison sentence. After getting out of the prison (in early 1936), he remained involved with CPY, in 1937 he met Josip Broz Tito (the secretary-general of CPY) and in 1938 he became a part of the party’s Central Committee in 1938 and its Politburo in 1940.

So, at the time of the capitulation of Kingdom of Yugoslavia in 1941, Đilas, an ex philosophy and law student still in his twenties (a couple of months shy of his 30th birthday), due to his position in CPY and the fact that he originated in Montenegro, gets assigned a task to start an uprising against Italian occupation force in Montenegro. At that time, CPY is the only organization capable of rallying and organizing its members, which puts it in a unique position to establish itself, start and try to steer the uprising.

This book was published in 1980. Before that a lot has happened to Đilas. He fought and won the war, became a key political figure in Socialist Yugoslavia in the first post war decade (perhaps second only to Tito himself), but in late 1953 he came in a political and ideological conflict with Tito, and as a result he got denounced, ostracised and he served long prison sentences (1956-1966). Completely excluded from Yugoslav public and social life, he managed to get some of his writings published in the west.

At the time of writing of Wartime, in his late sixties, Đilas was a politically ruined man, with his previous political role and contribution in the national struggle and revolution domestically under-appriciated and revised. During all of his life he aspired to accomplish himself as a writer and an intellectual, and now, late in his life, he took to himself to portray his wartime role to foreign audiences and hopefully to posterity (the book was unavailable in Yugoslavia until the communist downfall).

A wealth of information was already published and readily available about the historical situations that Đilas described, and he did not add or contradict to it much. He did protest some interpretations of his role that have arisen after his downfall, but these accounts are in line with what I read from impartial historians decades after the end of communism in Yugoslavia (he was obviously being framed and villainized).

All of the above are facts, and the following is my opinion.

For me the greatest value of this memoir is in the way he writes, the tone, trying to explain himself, his friends and comrades in arms and trying to reconcile a Đilas revolutionary with disillusioned Đilas of post 1953.

I think that Đilas was very much concerned about the way he sees himself and how he wants to be seen. He had already assumed a role of a sort of a dissident martyr, though appreciated (or used) only in the west. An accomplished revolutionary, idealist who fought for liberty and a better future who got disillusioned at one point and who sacrificed himself trying to change and better a system he helped build. At least that’s the story.

In Wartime, he tries to sound objective and impartial, often subtly reminding the reader that he does not leave anything out, however embarrassing for him it may be. I think that he was a vain, conceited man. This can be seen from the way he writes, how he assesses and describes the people he interacts with in the memoir. All too often he judges their intelligence and capability, of course deeming them inferior to himself. And yet, there is not much that made him qualified for raising an uprising or fighting a war - 30 year old ex student of philosophy and law, with not much life experience outside the party and prison. And yet he is in a position to decide lives either by influencing military decisions and sending people to their deaths or by judging them and passing (death) sentences. And this does not make him much different from other party officials. They trained themselves by getting lots of people killed, while keeping out of the worst harm’s way.

Đilas insists on portraying himself as an intellectual, a well read person, a humanist, someone who understands the higher goal and the obstacles in reaching it, and yet, whenever he cites official documents or recounts conversations he had with other high party officials, he sounds very much as a dogmatized apparatchik spewing out abstract party formulas that are supposed to explain or demonstrate the necessity of collateral damage - mass sacrifice of civilians and military units.

The identification of party interests with national and personal is amazing, and he never questions that. It was overwhelmingly in the party interest to start the fighting and to keep on fighting even when the toll on the population they were supposed to be fighting for was extraordinarily high. And yet, anyone who would protest against it, for example the population that gets punished by mass killings, cattle requisitioning or village burning by the occupying forces, anyone who protests or stands up against it gets labelled chetnik or the enemy of the people and becomes a valid target for retribution or plunder by partisan units.

The party did not tolerate any dissent or questioning, it was extremely centralised and it insisted on discipline. Non conforming was equal to treason and the penalty was death.

The lack of his intellectual or in fact any personal integrity is nowhere so obvious then in his relations to Tito, who completely dominates him, and Đilas is happy to accept this domination. This is true for all other central comity officials as well.

The other thing that stroke me is that amid of all this talk of equality, socialism, fight for a better future, Đilas takes it only natural that he and the other high party members are entitled to being better fed and clothed, better protected, lodged in requisitioned villas and hotels, etc. While he does reproach Hebrang and his wife for exploiting their party positions too much, he does not extend that to himself, Tito or others.

WW2 in Yugoslavia is soo complex, on so many levels. A world war, a civil war with multiple factions fighting each other, wars of secession, a revolutionary war, occupying and allied powers with their own interests… And it lasted 4 long years in Yugoslavia. It is very hard to completely grasp and understand, and almost begs for simplifications - identifying with a side an event, a group or a person. That helps with digesting a complex set of events into a simple emotion or position, but to try and fully understand those events, all the layers need to be appreciated, I think that this book adds another valuable layer.