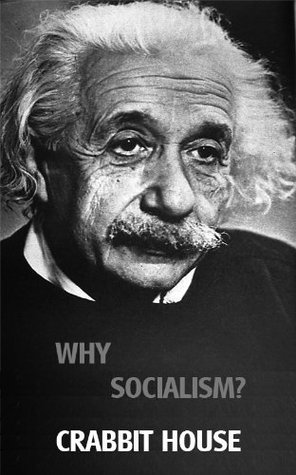 Einstein's take on inequality and injustice in the world, and how they could be solved.

Thus, Einstein concludes, “there is only one way to eliminate these great evils, namely through the establishment of a socialist economy, accompanied by an educational system which would be oriented toward social goals”. The means of production would be owned by society itself and utilized in a planned fashion, according to the needs of the community, and the work would be distributed among all those able to work guaranteeing the livelihood of every man, woman and child.

In the end Einstein warns that planned economy is not yet socialism, and that it may be closely tied with totalitarianism and complete enslavement of the individual.

I think that Einstein adds nothing new to the table with this essay - he recognizes and acknowledges some injustices but does not dare to propose a way out of them. He is well off in the society as it is, but can’t help not to notice that many people are suffering. Socialism is a type of society where means of production are owned and controlled by workers, and there can hardly be a peaceful way to transition the current capitalist society (where wealth is concentrated in the hands of a few) towards such socialist society. However, Einstein shies away from proposing any radical change or revolution…


The essay has a nice overview of what anarchism is and isn't, and also a brief history of implementation attempts of anarchism in Spain 1936-39 and France 1968.
vreme čitanja: ~ 1 min.